Nicole started dancing at the age of 3yrs old where she started off her dancing journey at Southsea School of Dance, working through her RAD & ISTD training in grades.
Nicole was lucky enough to have a wonderful childhood career performing in numerous pantomimes,  Touring with ‘Barneys colourful world’ UK tour, performing at the Disney Chanel Awards at the Royal Albert Hall, performed as one of the leads in London Children’s Ballet ‘Ballet Shoes’ choreographed by Mathew Hart to name a few!
Nicole furthered her training At Tring Park for the Performing Arts receiving a place on the dance course from Year 7. Then went on to further her training at the very prestigious Laine Theatre Arts where she obtained a Level 6 National Diploma in musical theatre and Dance.
Before starting SUPREME Dance Nicole worked at a dance school in Tring where she was Head of Dance. She taught for the academy for 5 years teaching street/commercial, contemporary, jazz technique, musical theatre. Before she began her work at the academy, the academy only offered musical theatre, dance grades, singing, and drama. Nicole feel’s very privileged to have had the opportunity to introduce and head up a new style of dance, being street dance and contemporary, which has been a huge success.
Her Achievements include: In 2018 she choreographed for a main stage Move It piece. Nicole has choreographed many dance festival numbers, including soloists and groups competing at the All England dance finals, Dynamite Dance, where her contemporary piece reached the finals and won best choreography.  In 2012 performed at the opening ceremony for the Olympics, In 2019 opened up for the Royal Family Dance crew which Nicole and Neil Jones choreographed. Also in 2019 she was the assistant choreographer for Neil and Katya Jones’ professional production ‘Somnium’ and personally invited and trained 20 pupils to dance in their show at The Sadler Wells Theatre.
After Nicole left Laines she was lucky enough to work with some high profile professionals, such as Cheryl Cole, however, her passion and love has always been teaching and choreographing street dance & commercial. This naturally led to Nicole setting up a team at the academy she was working for called AStarz Romasz Elite for elite street dancers. The team had only been together for a year and a half and had great success. Placing in the top 3 of BDO, UK street dance championships, 101 events, HIP HOP UK. She choreographed for ASTARZ which were selected to represent Team England in the dance world cup’2020 in Rome competing 18-25 years in street dance and commercial dance which unfortunately got postponed to 2021 because of the global pandemic.
Nicole has now followed her dream in setting up her own dance organisation. She plans to establish her elite squads to a top competing level nationally and potentially further, in her words, ‘the sky is the limit!’. She wants to provide a high level of teaching and personal coaching to each and every pupil at SUPREME Dance so that they can reach their full potential and more! Knowing what it takes to succeed in this industry Nicole is assured that with her training, experience, and guidance, she can fulfil the needs of her students to follow their dreams!

DeMani is a dancer, model and fitness instructor. She started her training in all aspects of dance at the age of 3 where she trained in RAD and ISTD syllabus and was also part of the Sylvia Youngs Agency where she featured in many TV commercials including Asda's Halloween special and MFI  and more.
At 11 DeMani decided to take up Ballroom and Latin, her teachers being 'Strictly Come Dancing Stars' Neil and Katya Jones in Latin and top professionals in Ballroom. She competed at prestigious dance competitions including Blackpool Winter Gardens, travelling all over the world competing in countries like Russia, Ukraine, Italy and Paris to name a few.
DeMani and her Ukraine dance partner won many dance titles over the years. In 2014 they became world runners up in Paris in the under 21 Ballroom dance category. She had a very successful dance career but also enjoyed her personal training too, so qualified in level 2 as a fitness instructor.
DeMani is very excited to join the SUPREME Dance family and work along side her sister Miss Nicole. She will be bringing all her knowledge and experience teaching young students and adults everything and more that you see on Strictly Come Dancing! She is very passionate and enthusiastic, and will certainly have those hips working and your Cha-Cha-Cha looking FAB-U-LOUS!! ​Bianca Sherratt is a dancer, singer, model and actor currently studying at Stella Mann College of Performing arts. She will leave her three years of intense training with a level 6 diploma in performing arts. Bianca is fully DBS checked and loves teaching just as much as she loves performing. She has worked and been trained by choreographers such as Johnny White, Liv Quantrill, Jaron Johnson, Christina Andrea, and many many more. Along her journey she has been in shows such as “Somnium” (Neil and Katya Jones’s professional show) on the west end. Alongside performing on the move it main stage for many years in a row, she won the “Face Of Bloch” runway stage competition for 2019. She trains in styles such as street, commercial, jazz, tap, ballet, contemporary and many more. Regularly training at Base studios and Pineapple studios, she has many connections within in the dance industry and has a lot of knowledge within that. Bianca will bring a training system in which the students will have fun but also work hard in a good blended balance.
​Bianca will be teaching 1-1 private lessons, Heels class and helping out with our younger classes. She looks forward to helping her students be the best versions of themselves in many different aspects. 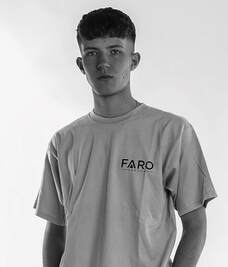 
Ben is a dancer ,model and actor who has danced since the age of 7 . Dance has been Ben's main passion for 11 years now and has improved his skills and ability’s by involving himself in many different dance establishments.
Places such as BASE , Pineapple, Boy Blue and dancing in SUPREME Dance senior elite squad has given Ben lots of training and performing skills in the hip hop and street dance industry.
He is trained in hip hop, popping, commercial,  house , afrobeats and many more of the street styles.
A few of Ben's professional credits include an adult theatre show of Westside story where he played the part as one of the Jets at the age of 15. In this he performed many dances as-well as supporting this with singing and acting. He also has appeared in a music video for a singer playing a role as a young boy which achieved over 30 million views on YouTube.
Ben attended West Herts College achieving a Level 3 diploma in dance where he studied other styles such as ballet , jazz , tap and contemporary. Ben achieved two Distinction's and one Merit at the end of his two year course. He is now sharing his passion and his talent by introducing a boys only class to SUPREME Dance, bringing energy and his enthusiasm.


Cameron graduated from the “Guildford school of Acting” achieving a First Class Honours Degree in Musical Theatre. Most recently Cameron was cast as 1st cover George Mcfly and fight captain in the world premier of “Back to the Future the Musical” at the Manchester Opera House. He also performed this year with the cast of Back to the Future for BBC Sports Relief. Cameron’s other professional credits include “Belgravia ITV Drama” as a dancer and guest entertainer on P&O, NCL, and Celebrity cruise lines with “The Other Guys” performing songs dedicated to the legends of music. Cameron learnt his acrobatic skills with the “Ground Breakers crew in Watford” and continued to progress his skills both at “GSA” and “Woking Gymnastics club”
He is very excited to be part of the SUPREME Dance team and cannot wait to pass on his knowledge and Acro skills to our pupils.